The pattern is from Pam Palmer's Tatting Designs published in 2018 by Heidi Nakayama. It has the cat on the front cover and is a lovely collection of patterns that Pam had taught at various meetings and conferences. 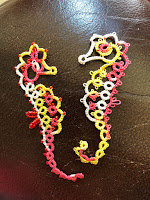 I received a ball of Altin Basak in the CWT exchange and decided to work on the seahorse that I really mangled at camp. The picture to the left is from that ball of thread. Since I tat frontside/backside by choice, I was able to create a right-facing seahorse (with the beads) by starting the initial ring on the front side in standard order (under & over, then over & under) ... and yes, there were pattern-reading errors on that one as clearly seen on the head portion. The left-facing seahorse sans beads starting with the initial ring as RODS.

Still working in my mind how to complete this in a single pass as the original instructions have the abdomen added as a "second pass." 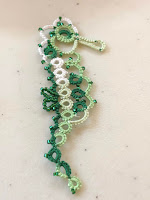 The original camp effort doesn't have a long enough tail as you can see on the right here. This one is Lizbeth 20 and color 152 (Christmas Green Mix). The beads are from some that I received out of Bobbie Demmer's stash. There are also errors on this one in addition to the shortened tail but it does resemble a seahorse!

I'll probably redo this same thread/bead combination at Shuttlebirds 2019 workshop the first weekend in May. 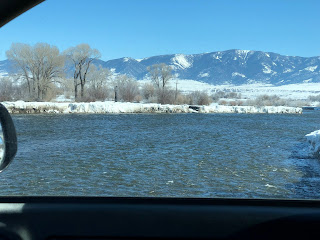 Hope you are all having a wonderful tatty day! Here in the Madison Valley, the sun is shining and the snow is melting. This picture was taken on the 27th of March from Ennis bridge over the Madison looking toward the North. The ice dam from the previous week is completely gone although there is still flooding in low-lying areas ... primarily now from snow melt.

I was working on a flurry of snowflakes for our tree in December however the 75+ I had finished will need a SEVERE washing as I found some "floating" in tea. Some may have to be re-tatted but I will face that after returning from Flathead Lake this weekend. I don't have any new pictures to add as I am getting my shuttles ready for classes from Randy Houtz, Anita Barry and Heidi Nakayama. I am looking forward to seeing everyone!

I have decided however to let you have a copy of two snowflakes I designed in the Winter of 2005-2006. Just email me and I will send you the PDF file. The PTG 2005 snowflake has "modernized" notation, a picture and a diagram. The SCMR 2006 snowflake does not have a diagram (someday I'll get around to that someday). Pictures (taken from the PDF files) are shown.