I love having time to do my crafting but I also have time for exploration both with DH and alone. Last week, after a lunch meeting with my oily friends, I went driving around Ennis Lake (which is still partially frozen over). One of my favorite spots is on the southeast side of the lake looking towards the Tobacco Root Mountains. There is a an old fireplace where a cabin once stood and it looked a bit strange. When I took a second look, I realized it was a Bald Eagle. I grabbed my cell phone and snapped a picture. Unfortunately the picture doesn't do the magnificent creature justice. 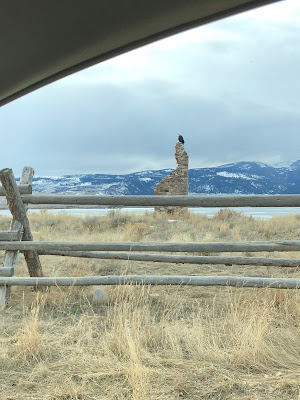 I also go exploring with DH and one day, we decided to drive over to West Yellowstone as our roads in Ennis were clear and US287 to the South was clear. HOWEVER ... when we made the turn towards the east near Raynalds Pass, the conditions changed somewhat abruptly with snow and ice on the highway. Both Quake Lake and Hebgen Lakes are frozen over completely. Snowmobilers were out on Hebgen and folks were ice fishing. The picture is of Quake Lake as we were heading back to Ennis after visiting Blue Ribbon Flies in West Yellowstone. The area with all the snow on the mountain side is the slide area of the Aug 1959 earthquake that created the lake. 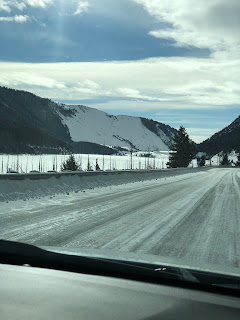 Now to the important stuff. I'm participating in both an exchange and a tat-a-long in a couple of Facebook groups as well as JaneE's 2018 Tat It And See (TIAS). I've also done some edging pieces and small motifs for the PTG 2018 Fundraising Quilt and am sending back to Georgia Seitz today or tomorrow.

Through Day 9 of the TIAS, I sent this off to Jane earlier today. I figure it will be one of Jane's "people" but I need a few more clues as to specifics. 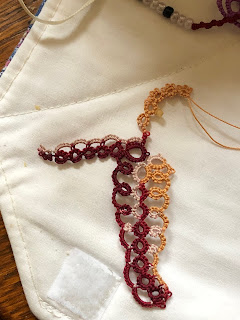 With the exception of the Tat-a-Long, all other threads are Lizbeth 20. I also have some pink threads on order from Tatting Corner. Pinks are not typically colors I have in my stash so it gave me an excuse to order for the TatAMonumentInPink initiative by Canarithy. It's a nice little motif that doesn't take all that long to do a single one. If I forget to put in magic threads or filament loops, it takes me longer to sew in the ends. I hope to get 10 or 15 completed before I need to mail to Belgium. There are three together in the center of the quilt block picture above.