This past weekend, I was trying to "organize" some of my stuff. While going through several patterns I've received during several visits to CWT, I re-discovered the 1999 Hedgehog pattern by Randy Houtz. This pattern using a tatted bauble methodology to create a 3-D hedgehog. I've photographed it with a SewMate shuttle for scale. The finished size (tatted in Lizbeth 20, color 692) is 1 1/2" long and stands 1" tall. I think he's really cute, what do you think? The picture's not all that clear (I'm still playing with new camera so the focus isn't as clear as I'd like). 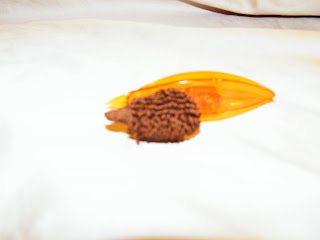 The Palmetto Tatters Guild 2009 event "I've Been Bitten by the Tatting Bug" is now history. I believe everyone enjoyed themselves ... I know we (DH and me) certainly did. Lots of work but it was worth it to see everyone we hadn't seen for a year and meeting face-to-face tattings friends that we had only meet through the Internet. There was lots of shopping, classes, shopping, laughs, shopping, chocolate (of course!), and did I mention shopping!!! Kudoes to JoannieC and HopeB as the co-chairs! Both of them, with the rest of their team, did a wonderful job. As everyone was leaving yesterday, the phrase we heard over and over was "Hate to go ... but we'll see you NEXT year!"

Tracy and Bill Jackson of The Lacemaker did another terrific job to bring all the newest threads that have just recently become available. There is the replacement thread for Coats Opera (discontinued a couple of years ago) ... it's called Freccia. Some of the balls (as they appear in that form) remind me of a perle cotton while others are closer to Opera. The thread has a pretty firm 'hand' for a 3-cord ... much firmer that Opera did and a bit firmer than Altin Basak. I do believe that Lizbeth 40 has become my favorite thread. I love the 'hand' when tatting ... nicely firm, beautiful sheen from the mercerizing and luscious colors. There were also lots of books and tatting tools whether it was shuttles, needles or other "stuff."

Georgia Seitz has to be the most OUTRAGEOUSLY entertaining auctioneer and game show hostess I've ever seen. The treasure chest put together by the Tatting World was so HUGE that it was broken into least three prizes. I couldn't tell whether AKTTTER was a female version of Monte Hall (Let's Make a Deal) or Bob Barker (The Price is Right) ... well, maybe more Monte Hall. Erin Holloway did a wonderful imitation of Carol Merrill ... the hand gestures and voice inflections were PERFECT. The auction for the Tatting Treasure Chest was a lot of fun but it raised some serious money for the Guild's scholarship fund. Watch for announcements about quilt blocks for the next PTG Scholarship Fundraiser!!

There were so many of our participants who also brought WONDERFUL items for the Silent Auction. The Georgia-Lina Tatters (one PTG's Palm Fronds) had issued a challenge to the other fronds. Everyone certainly lived up to the challenge!! The Lacemaker put in a couple of items ... I lost out of the bidding on the jar of threads, tatting tools and other goodies I was watching but I known Sharon will enjoy her additional stash. Each of our teachers contributed items. Several other tatting groups whose members were attending also contributed to the Silent Auction ... in fact, we had a wonderful challenge of finding enough table-top space to display all of the items and put the bidding sheets with them.

We also hosted the first ever, LIVE TAT IT AND SEE. Donna T was posting various stages as they were completed onto the Guild's official website. It was a lot of fun ... there is one stage that if you switched working shuttle, you could have wound up with a perfectly different critter!! In order to participate, we had to sign a SUPER, SECRET CONFIDENTIALITY AGREEMENT for Part 1 (because some of us were a bit antsy about blood, there was a red ink pen). To receive each consecutive part, you had to show the completed parts to JaneE, DonnaT, JoannieC or BonnieG in order to get the next part. Had a great time with that!! There were just enough distractions that I had to retro more than I usually do but with everyone having so much fun it was no problem!! My part 5 can be found here: TIAS - Part 5; my first effort was one of those that would have been very strange (went into the round file) so I changed from two decorated shuttles from SLT to a laminate shuttle by Richard Seitz and a Texas Fence Post shuttle from Jack Coen so that I could tell the difference between Shuttle 1 and Shuttle 2 ... multi-tasking brain cell disappeared!

DH rode his Kawasaki motorcycle down and there is a picture of it (sans the cover) on Lori's Facebook page: The 650! He had a good time and it was a nice ride down from Gastonia on US 321 for him. Because he had his own transportation home, I got to join the Chocolate Therapy frond at the Mall Sunday afternoon for a bit more tatting but instead of chocolate we had ICE CREAM!!  Better dash and take care of some reports and maybe pick up a shuttle to put some double stitches onto a core thread and make more lace!
on September 14, 2009 2 comments:

Just a week until Palmetto Tatters 2009 Tat Days - "I've Been Bitten by the Tatting Bug!"
There are a lot of last minute details that are being completed. The goodie bags have lots of very useful stuff this year. I've had several boxes of goods from various consignees for the vending room that have arrived for transport to White Oak.
DH and I have been our staging area to load the car to go to Winnsboro on the morning of the 10th. If the weather continues to be nice, he's talking about riding his street bike down. We'll take US321 down from the Charlotte area. That is such a lovely drive.
Lots of folks are listed as coming and it will be so much fun to see everyone we haven't seen for a year. Others we haven't seen for several years. There are even some "newbie's" for attendance but certainly not strangers to our Guild.
I'll try to better about getting pictures this year but take a look at the Guild's website. Donna and Jeff (in there spare time --HA!HA!!) have put slide shows from our 2008 event. http://www.palmettotatters.org/events/TatDays2008/TatDays2008.shtml#slideshows is the URL. There are three slide shows that are fun to watch!
on September 03, 2009 No comments: