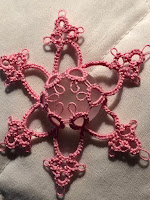 I finally completed my first two ice drops. The pink one is from PTG's 2019 project folder and a pattern taught by Marilyn Jones. 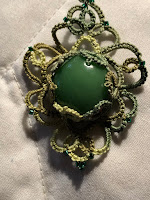 The second is a pattern taught by Char Toyosaki at CWT in Fall 2018. I was unable to attend the camp but for a couple of hours; Char gave me the pattern and a number of gems. The one I had chosen initially was too small as I didn't use my normal tight tension. I found a larger gemstone that was more oval rather than round. It is a bright green gem while the picture is of the original.


I think both will look beautiful on our new Christmas tree this year. I do have a lot more gems that I have been given. It doesn't take that long now that I have a bit more practice and understanding of the tension required. I will probably need to adjust my stitch count on some. I've been busy downloading files from the FB Ice Drop Addicts site to print and take with me when DH goes fishing.

I've been emptying shuttles in order to complete the Beginner's Doily by The Shade Tree Designer (aka Harolah Cheser) as will as planning to start Mike Lyon's beautiful Lagniappe. The pink butterflies are from Gary & Randy Houtz (aka The Shuttle Brothers) ... I love this one and usually take off with different stitch counts and differences on the picots. These will be going to Palmetto Tatters Guild to pay my 2019-2020 "dues." The brown and terra cotta one is the Brothers "Da Udder Butterfly." Another pattern that I enjoy tatting. Sometimes I add a third shuttle and take off from there; more of the SBs techniques!


The last butterfly is from a pattern I found completely by accident. It is from 2011 and is a design by Maria Lena who I believe is from Romania ... at least her blog is written in Romanian according to Google translate. I did change the stitch count and need to play a bit more with this technique. She used a beautiful gemstone to create a brooch for a friend. This is a technique that I need to work a lot more to get it to looking good! 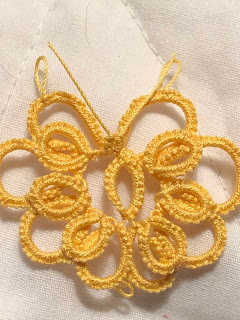 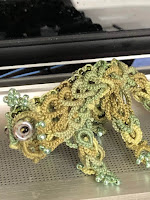 The last of my homework for CWT Fall 2019. This is a design from jtatter on Etsy aka Yulia from Moscow, Russia. Her original chameleon was completed in lime green but I always thought it would look really good in Lizbeth 138 (Leafy Green) especially since some chameleon's are typically multi-colored greens in the wild. The article from Wikipedia about chameleon's is very interesting. They seem to have a remarkable life span (3-11 years depending upon the species). My decided to join me this AM at the computer.

Next on my tatting agenda is to take a break from homework and work on The Shade Tree Designer's Doily for Beginners. I have chosen to do the five rounds in four colors: a chocolate brown, a terra cotta reddish orange, a yellow, and either a light yellow, ecru or white. I'm also substituting some CWJ (Catherine Wheel Joins) for lock joins. It will be an interesting study in color I think.

Also thinking about proposing to teach at Tatting Corner's 3rd Annual Tat Days in July. The theme is "The Roaring 2020's" and some of the ideas popping around my head include updating some 1920's patterns with modern notation/shorthand and bridging and include diagrams. Might be an interesting study but there is a short timeline.

I also need to get some more of Christmas ornaments made. We are staying in Montana this year for the season. A new tree was delivered from Balsam Hill last week. Most of our ornaments are still in North Carolina so we may need to get one of our sons to ship us the boxes in which they are stored. A 7' foot will need a lot of ornaments!
on November 07, 2019 5 comments:

"Autumn" in YNP and more Homework

Our younger son flew out on the 27th of October and spent a week with us. It gave him an opportunity to get away from work and get some rest and relaxation. He enjoys fly fishing (as does DH) as well as shooting. He got to shoot our shotgun at a really fine establishment in Bozeman. 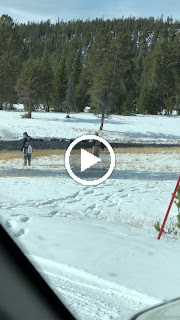 When he booked the trip, he mentioned that he hoped to see snow. He really did see snow as well as some below zero fahrenheit temps. The short clip here was taken on Saturday (2-Nov) in Yellowstone National Park near the convergence of the Nez Perce and Fire Hole Rivers. DH is on the left and DS2 is on the left. It was about 21F when this was shot but the sun was shining. There was evidence of a brown bear in the area as well as one of the lone bull bison making his way toward Madison Junction (where the Fire Hole and Gibbons Rivers converge to form the Madison River). I was toasty warm in the car with the sun shining in and finished some more of my homework.

The pictures above (left to right) as well as to the right are from Robin Perfetti's Onion Square and Magic Square. The first two are in the shades of pink with the colors reversed for the two squares. The picture of Magic Square 1 is the reverse of the previous post; the rings are a solid blue while the chains really show off the colorway I chose. 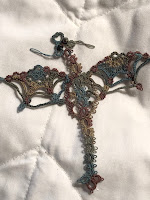 The picture on the left is Anne Bruvold's Flying Minor Norwegian Dragon using Lizbeth 20 (179) Herbal Garden. LeesaK taught this at Camp earlier in October focusing on SSSRs using a second wrap around the base to add stability as well as twisted picots for the horns. The piece isn't yet blocked and lacks some size 80 red, orange and yellow threads to form the flames to be fire-breathing.


Last for this session is Dinky the Cat, a pattern from Erin Holloway taught by SandyC. The one on the right is the one that I actually finished in class ... however, after seeing Bernice's it was evident that I had forgotten a ring on the body. That one is done in a calico colorway from Karey Solomon; her HDTs are wonderful. The one on the left follows Erin's pattern and has a pink body (reminiscent of Peter Seller's Pink Panther series) which is Erin's favorite color and notice the BLING from the eyes and bicones as the feet. 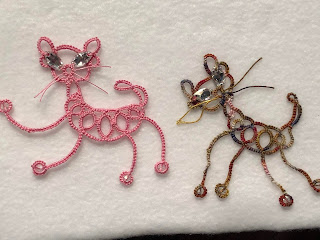