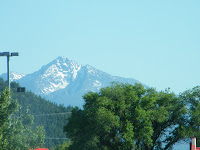 Tonight is my last night in Montana for 2010. I've stopped in Livingston, MT which is at the intersection of I-90 and US-89. If I were to continue south on US-89 instead of going east on I-90, I would go into Yellowstone National Park (the NE entrance just past Gardiner, MT).
This picture is taken from the hotel parking lot looking southward toward Yellowstone which I believe is beyond this mountain range.


I really had a great time at Camp WannaTat again this year. It was really neat to see everyone I hadn't seen in at least a year's time. Shuttle Brother #1 had a hip replacement in February and is getting around wonderfully well. He and Shuttle Brother#2 brought #1's daughter-in-law with them. She is a wonderful young lady and does beautiful tatting as well. 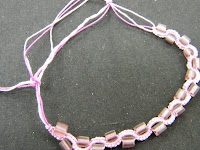 I did finish three of the four projects presented by the teachers. Irene from Yukon, OK presented a pearl-tatted bracelet (Picture to the left). The Shuttle Brothers presented a scissor protector (shown below on the right) that uses the bauble-tatting concept and starts with a ring and is tatted to fit a piece of tubing. I purchased a number of charms and was given a bunch of tubing. I plan to make a number of these and will probably donate for Palmetto Tatters (door prizes anyone ... not the scissors though LOL) TatDays 2010 which is fast approaching. The ones that will be used for door prizes will have charms, beads and other embellishments added.
Karen from Snohomish, WA presented an earring pattern that I need to look at the actual construction bit closer when I return home. I know the concept but wasn't happy with my results so it went into the tin for a later do over. 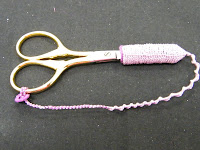 Deb with DS9Designs presented a Patti Duff earring pattern that is really quick and easy but looks so much more difficult. Lots of possibilities for the individual to play with different styles of beads. I didn't keep the pair I completed but donated to the Guild in Thompson Falls for their sale later in the fall. Didn't even get a picture but they are so quick and easy ... I'll probably add several different thread colors/bead combinations into my personnel tatted jewelry.
My drive tomorrow will take me out of the Montana, Wyoming and South Dakota mountains and onto the rolling prairie land of southern South Dakota ... all on I-90 East. Tata for now.
on June 28, 2010 2 comments:

Stopped for the night in Mitchell, SD. Whenever DH and I drive this, we usually stop at the HUGE Cabella's shop in Mitchell. I believe it to be as big as any Bass Pro Shop. Not too much rain but the roads were a bit wet this morning when I left Peoria. Every where we go it seems that there is road construction. The interstate system in the US is really showing its age and all the wear and tear. There is always construction in the summertime along I-90 through South Dakota, Wyoming and Montana. Winter weather, I'm sure, is especially rough. Going to grab some dinner and hit the sack early.
on June 21, 2010 No comments:

It's been quite a well since I posted but I've been asked to keep my guild members posted on my current travels. We had a very good Guild meeting on Saturday the 19th at the Lexington County Museum. What a great place to meet. Although we have to bring in a number of Ott or other day-light type lamps, the atmosphere is really great. The staff always sets up the tables for us. After we left from eating supper together, I drive as far as Hendersonville, NC where I stayed Saturday night.

Yesterday morning I hit the road about 7:30 AM and drove to Peoria, IL. Had a good rest but have woken up to a thunderstorm. Looks like my drive today will be in and out of thunderstorms so I may not get as far as yesterday. It's very tiring to drive through heavy rain and varying wind speeds. Will also need to keep a weather-eye out for potential severe thunderstorms. Will post more when I stop tonight as I need to get onto the road.
on June 21, 2010 No comments: