Summer has only been here for a couple of weeks (by the calendar) but I feel as though it is flying by! Heading east next week to Indiana for Tatting Corner's 2nd Tat Days. I have some interesting classes scheduled from Carollyn Brown, K Boniface, Shelley Perreault, Kaye Judt and the irascible Randy Houtz.

Registration for Palmetto Tatters Guild 2019 Tat Days is well underway. This is the 17th annual event that PTG has hosted and the tenth year for the location near Toccoa, GA. It's a lovely location with a lake just outside the dining hall. The staff at GBCC is always courteous and so helpful. We have 93 registered after only 3 weeks; on-line registration will remain open until midnight August 10. Lots of surprises this year including a purple shirt, a really cute shuttle from Shuttles by Design and a special commemorative ... a pattern media for the first three years (2003, 2004 & 2005) ... never available previously!

I've spent some of this time making up zipper pulls for the staff at Flathead Lutheran Bible Camp where Camp WannaTat has continued since the passing of Bobbie Demmer. They are such a wonderful group of folks and work so very hard. 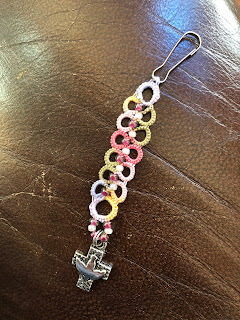 The zipper pull is made as Gary Houtz' variation on Patti Duff's lanyard pattern. With the exception of the first and last rings, all others are SCMRs with the bead placed onto the core loop BEFORE posting the shuttle through the loop and drawing the SCMR closed.

I love making lanyards this way as I can use two colors, one on each shuttle, and don't have to worry about counting/loading the beads before I start tatting. I also used two different kinds of beads. Hard to see here, but the pearl beads have a facet cut (size 8) and the reddish beads are size 6; the charm is one I found at Fire Mountain and thought appropriate for the recipients. The colorway is Lizbeth 154 (Wildflower Garden). 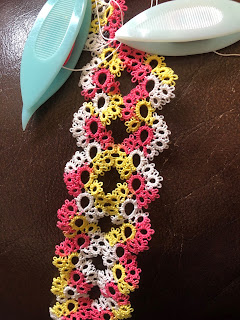 I've also been playing around with a ball of Altin Basak and Mary Konior's Curds 'n Whey (one of my favorite edging patterns). While the thread isn't exactly my favorite, I think it will work into an insertion. I can't believe that the colors are matching up as well as they are.

I worked on this the other day while DH was fishing in Yellowstone National Park. One of the park rangers told him that he had a BIG, BIG brown bear watching him. The bear was about 30 feet above him on a bluff while RLW was on the far side of the Madison River below the campground. I had seen the bear earlier and he was really big. I could see him a quarter of a mile away WITHOUT my field glasses.
on July 02, 2019

Thanks for explaining the alternative method for making the lanyard, easier not to have to load beads onto shuttles. Love the double curds and whey.

Thanks for looking and your comments. If you'd like, I can share the instructions on the GH version of the lanyard, especially the two-color. I made one several years ago and gave it to a friend in Ohio. She really loves to wear it and gets lots of compliments!