I've been working on more projects from various classes I've taken since retiring in April 2017. Much of the time, I usually work on these in Yellowstone National Park while hubby is fishing the beautiful Madison River (which is formed by the Gibbons and Firehole Rivers). Yesterday (Oct 18) when we were leaving the house, this beautiful scene of Fan Mountain presented itself: 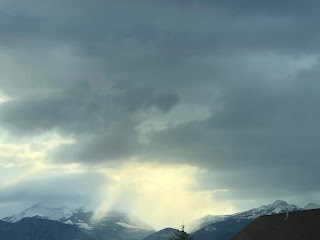 Fan Mountain is to the left of the picture with the peak slightly obscured by clouds but the sun's rays pouring through the clouds were spectacular (my phone's camera doesn't do it justice)! We were presented with lots of changes in the Park during the day as well as the drive to and from. Going through the area between Quake and Hebgen lakes, we got snow and slush along the highway. Windy in West Yellowstone of course then into the park where we had lots of wind along with sunshine, light drizzles and light snow. More snow expected there today and our rain is forecast to turn to snow later this evening. 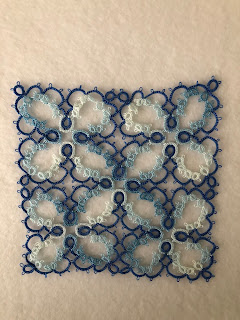 I did manage to finish a Magic Square project from Camp WannaTat although this is not the original start from camp (that was in two shades of pink and I am NOT a pink person). This one is done in some DMC size 80 in my stash. Most of the chains and the interior of the onion ring is done in a solid (#693) while the rings are in an ombre colorway of blues. This piece isn't blocked as yet ... I just put it into a tatting press that I was given several years ago (thanks, Di!). The piece is approximately 4" square and is from Robin Perfetti (Magic Squares); the one pictured is Magic Square #2. I worked on a Magic Square project many years ago and it's in a "safe place" somewhere among my other WIPs. Currently working on MS#1 ... probably half-way done; I'm just reversing the use of the threads as the rings will be the solid while the chains are the colorway. Doing onion rings the way Robin does them makes me want to go back to Lene Bjorn's 24 Snowflakes in Tatting to redo the onion ring flake using the Catherine Wheel Joins that were emphasized at Camp on the this project.

Your Magic Square is very attractive in these colors. The ombre and solid placement turned out fantastic. Will look for the next one where you switch threads.

Montana is a beautiful state. I have property in the Bitterroot Valley that we've decided to put on the market. You live in one of my favorite states.

Your tatting colours reflect the colours in the landscape!

Aren't magic squares fun, Teresa? I find it fascinating that you can do so much in one round if it is planned right. It is a bit similar to the coin purse Sharren taught at Tat Days. One round and so much done. Those are perfect colors for it, too.